War Poet to Speak at DMACC-Boone 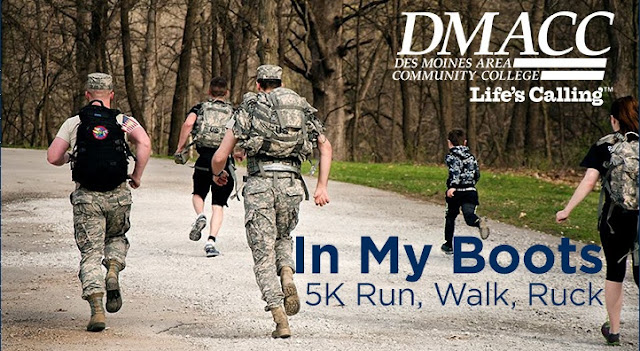 Helping to raise funds for veterans charities via the "In My Boots 5K" student organization, 21st century war poet and Central Iowa journalist Randy Brown will present words, pictures, and lessons-learned from a 2010-2011 deployment to Afghanistan 7 p.m., Thurs., March 30, on the Des Moines Community College (DMACC) campus in Boone, Iowa. The public is invited. 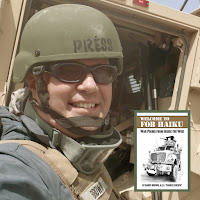 "Des Moines Community College has a history of helping Iowans put knowledge, experience, and service together in creative ways," says Brown. "I'm hoping to share how and why our citizen-soldiers made history in Afghanistan, and how we can engage each other in conversations and stories about war.

A freewill-donation spaghetti supper will start at 6 p.m., with Brown's presentation to follow in the college's auditorium at 7 p.m. A number of related books will be offered as door prizes, as well as for purchase.

In 2009, Brown started blogging as a deploying citizen-soldier, writing under the pseudonym "Charlie Sherpa" about his family's experiences in preparing for war. The 2010-2011 deployment of Iowa's 2nd Brigade Combat Team, 34th Infantry "Red Bull" Division was billed as the largest call-up of Iowa troops since World War II. The 2-34th BCT is headquartered in Boone, with battalion and company headquarters located across the state.

When he was dropped off the deployment list just days from federal mobilization in 2010, Brown retired from the military and then went to Afghanistan anyway, embedding as civilian media with his former "Red Bull" colleagues.

Brown is author of 2015's "Welcome to FOB Haiku," an award-winning collection of often-humorous war poetry; and editor of the recently published "Reporting for Duty," a 668-page collection of journalism generated by the 2-34th BCT while deployed to Afghanistan. He is also a former cast member of "Telling: Des Moines," a veterans' storytelling performance that was staged at DMACC-Ankeny campus in 2012.

The annual "In My Boots" 5K walk, run, and ruck event annually raises funds for veterans-related charities. This year, proceeds will be directed toward Paws & Effect, a Central Iowa non-profit that raises and trains psychiatric service dogs for military veterans and others. The 2017 "In My Boots" event will take place April 15 in Boone's McHose Park. On-line registration is available here.

A Facebook page for the "In My Boots" student organization is here.

A Facebook event page for the March 30 event is here.

For information, contact:
To make on-line monetary donations to "In My Boots," visit here.
Posted by Charlie Sherpa at 5:00 AM No comments: