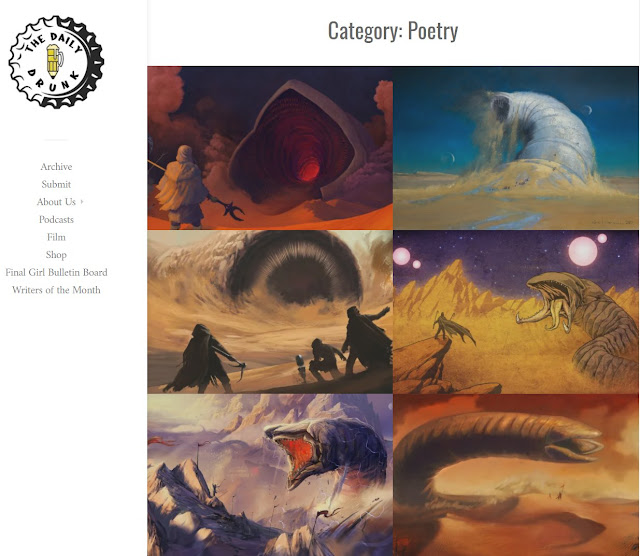 The author of "Welcome to FOB Haiku" and "So Frag & So Bold" has published a poem written in the voice of the monstrous sandworms of Frank Herbert's 1966 science-fiction novel "Dune."

Poet Randy Brown's "The Quotable Shai-Hulud, Subway Sandwich Artist(tm), abridged" gives voice to the great worm as the sandwich-making employee of a national fast-food restaurant. The poem is presented as a series of maxims, most of which are based on lightly altered quotations from Herbert's original text.

For example, the poem begins:

"Bless the Sandwich-Maker and all His Ingredients. Bless the coming and going of Him, May His passing cleanse the world. May He keep the world for his people."

Herbert's epic space opera tells the story of political and military machinations around a singular desert planet called Arrakis, the universe's sole source of "Spice." Spice is a mineral that variously enables prophesy and intergalactic travel. Underground deposits of the cinnamon-like material often seem to be guarded by lumbering "sandworms," some of which can grow to be hundreds of meters in length.

Editors at The Daily Drunk Magazine, an on-line literary journal that often focuses on popular culture and film, had earlier solicited prose and poetry written to the prompt, "The sandworm from Dune takes a day job."

The novel "Dune" has recently been presented as a $165 million feature movie—the first of two parts—directed by Denis Villeneuve and starring Timothée Chalamet, Zendaya, and others.  The Daily Drunk Magazine reviewed the new movie "Dune" here.

In addition to Brown's poem, other "Dune"-inspired prose and poetry published this week by The Daily Drunk Magazine included:

You can follow The Daily Drunk Magazine on Twitter: @dailydrunkmag
Or on the World Wide Web: dailydrunkmag.com

Posted by Charlie Sherpa at 8:00 AM No comments: