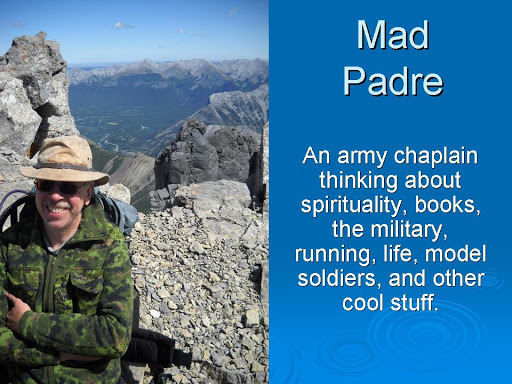 In a "taxonomy of war writing" published earlier this summer, the well-read Canadian chaplain and mil-blogger "Mad Padre" field-stripped such literature into the following categories:
MadPadre calls the latter category "most challenging aspect to war literature of any generation." He asks, "What distinguishes a soldier's memoir or a journalist's account of war from that of a poet or novelist? What are the standards by which we can assess the craft of war literature from the content?"

In his consideration of remembrance as art, MadPadre graciously mentions "Welcome to FOB Haiku":


Prose writers like [Phil] Klay, [Kevin] Powers and [Brian] Castner offer many examples of well-worked prose, the result of long hours and revisions. Some memoirs have a highly poetic quality to their prose; Benjamin Busch's "Dust to Dust" (2012) is a particularly strong example. However, poetry per se invites our attention both for the quality of the craft and whatever hard-earned truths the poet has brought back from war. Randy Brown's 2015 collection, "Welcome to FOB Haiku", is a series of near-virtuoso uses of the haiku form, but also draws on classical English forms such as the sonnet, as well as free verse. Brown moves easily between modes, from low-mimetic comedy

to an Owenesque closing couplet that evokes the gulf of experience between civilian and veteran:

Brian Turner's 2005 collection of poems, "Here Bullet," based on his experience in Iraq, has a different quality than Brown's often colloquial tone, more formal and perhaps more introspective.  Turner's work is beautiful and haunting, and shows, as [Adin] Dobkin notes in his [Los Angeles Review of Books essay titled "The Never-Ending Book of War"], how war literature can create strains of empathy which complicate and even overcome the enemy's Otherness. In Turner's ''In the Leupold Scope'', a rifleman is suddenly connected with an Iraqi woman on a distant rooftop, hanging laundry.  In the soldier poet's mind, that woman becomes a muse channeling the countless war dead through her billowing clothing, creating a powerful sense that the soldier is an interloper, complicit in an eternal tragedy.


She waits for them to lean forward
into the breeze, for the wind's breath
to return the bodies they once had,
women with breasts swollen by milk,
men with shepherd-thin bodies, children
running hard into the horizon's curving lens.

You can read MadPadre's essay in its entirety here.
Posted by Charlie Sherpa at 5:00 AM No comments: