The author of "Welcome to FOB Haiku" has new work appearing in Collateral Journal Issue No. 3.1. The on-line journal—which twice annually publishes a mix of fiction, non-fiction, poetry, and art—"draws attention to the impact of violent conflict and military service by exploring the perspectives of those whose lives are indirectly touched by them."

Randy Brown's "tell me how this ends" is a short and simple poem, consisting of three questions. An accompanying biographical statement notes, "Many of [Brown's] recent poems, including this one, involve interrogating war and conflict as a parent of young teenagers. The phrase 'tell me how this ends' was popularized as a 2003 quote by then-U.S. Army Maj. Gen. David Patreaus regarding the Iraq War." 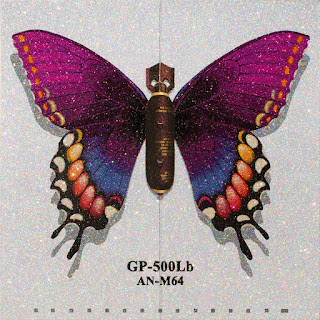 Graphics featured in Issue 3.1 are by Iranian artist Reza Baharvand, who also participates in a Q&A interview. "At first, I find an image of war, usually recent wars in the Middle East, from TV or the Internet," he says of his process. "It is important for me to paint war images completely, in detail, to emphasize that the images are existing in reality. I paint it realistically in large size, then scratch and destroy it. I scratch them in order to show how we ignore the truth. In the foreground, there are objects painted in glitter. They are objects from everyday life, but they are shiny and deceptive. The main issue is in the background."
Posted by Charlie Sherpa at 9:30 AM No comments:

Poem is Finalist in 'Proud to Be' Vol. 7 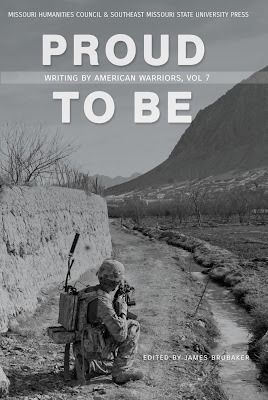 Randy Brown, author of "Welcome to FOB Haiku," has a new poem featured in the forthcoming anthology "Proud to Be: Writing by American Warriors."

Published by Southeast Missouri State University Press, and underwritten by the Missouri Humanities Council, it will be the seventh volume for such work. The book is currently available for pre-order.

The 200-page volume features poetry, fiction, non-fiction, photography, and other content by and about U.S. military veterans, service members, and families. The series releases annually in November, to coincide with Veterans Day.

Brown's new poem, "the ground truth," regards the experience of observing media and recovery efforts surrounding Flash Airlines Flight 604, which crashed in January 2004, minutes after taking off from Sharm el Sheikh International Airport. Killed in the crash were 148 civilian passengers and crew. Brown connects the event to the 1985 loss of 248 U.S. soldiers and civilian air crew in Arrow Air Flight 1285 in a crash near Gander, Canada.


Our desert watch was almost over
when charter Flight 604 banked steep
into the Anubis space
with 148 souls-on-board.
There was no moon.
The Red Sea was dark between
Herb’s Beach and the coming sun. […}

The poem is recognized with an honorable mention in the anthology.

According to press materials, judges included: