From the Archive: Haiku for Military Pros 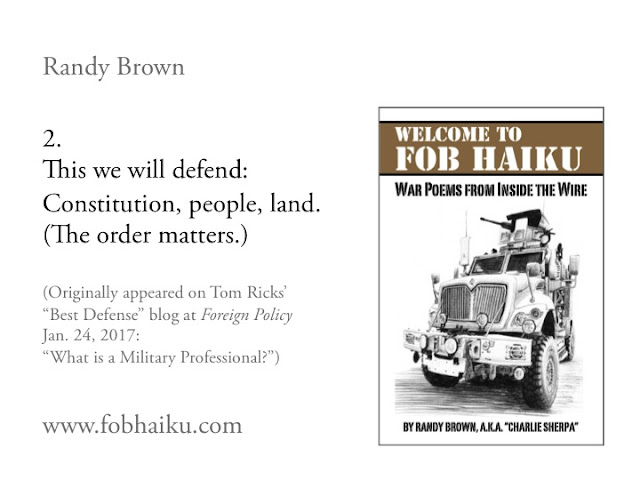 In January 2017, the Pulitzer Prize-winning Tom Ricks, who was then writing the "Best Defense" blog for Foreign Policy magazine, conducted a micro-essay contest (150-word maximum) on the theme: "What should a military professional profess?"

(Ricks has since moved his military affairs blog to the website Task & Purpose. There, it's now called "The Long March.")

"It isn’t as easy as it sounds," he wrote, describing the purpose of his informal contest. "It can’t be just 'patriotic,' because it should have application to the militaries of other countries. […] I’m asking this now because I suspect we will see some tests of military professionalism in the coming weeks and months."

Read the full pitch for the original feature here.

Inspired by Ricks' challenge of brevity, poet Randy Brown ("Welcome to FOB Haiku: War Poems from Inside the Wire") memorably responded with seven pithy insights in haiku form. The result was published at the "Best Defense" blog Jan. 24, 2017. Given that world events seem to increasingly support Ricks' premise—that our military leaders must navigate an ever-shifting professional terrain—we thought to revisit the haiku here:


1.
A practice of war
involves daily sacrifice.
The job is a trade.

2.
This we will defend:
Constitution, people, land.
(The order matters.)

3.
Any rag-bag Joe
who ever raised their right hand?
Now also, my kin.

4.
The only glory
one should seek is the respect
of one’s own soldiers.

6.
Your moral compass
should be red-light readable
for work in the dark.

Editors of "Flyway: The Journal of Writing & Environment" have announced that poet Randy Brown is the winner of their 2018 "Untold Stories" contest. The annual competition focuses on amplifying voices from marginalized populations.

This year's competition called for poetry, creative non-fiction, fiction, and hybrid forms produced by past and present military service members and family. Brown receives a prize of $250 for two new poems, "Better Hooches and Gardens" and "a chaplain's assistant writes haiku."

A former magazine editor and 20-year retired veteran of the Iowa Army National Guard, Brown embedded as civilian media with his former unit in Afghanistan, May-June 2011. He is author of the 2015 poetry collection "Welcome to FOB Haiku: War Poems from Inside the Wire."

You can read Brown's winning poems here, and more of his poetry work here. You can also access the Flyway Journal via Twitter here and Facebook here.

Based at Iowa State University, Ames, Iowa, Flyway's mission is to "explore the many complicated facets of the word 'environment'—whether rural, urban, or suburban; whether built or wild—and all its social and political implications."

"Contests like ['Untold Stories'] and our 'Notes from the Field' contest in December-January help us find new voices that keep our journal filled with interesting and diverse stories, while defraying some of the costs that come with running a non-profit literary journal," the editors write in their announcement e-mail. "[…] The editorial staff was overwhelmed with the breadth and quality of this year's submissions and enjoyed reading contributions from each author."

This year, the final judge for the "Untold Stories" effort was poet, memoirist, and anthologist Brian Turner, author of Here, Bullet; Phantom Noise; and My Life as a Foreign Country. The director of the low-residency MFA program at Sierra Nevada College, Turner also recently released an album of ambient music and poetry as part of the Interplanetary Acoustic Team.
Posted by Charlie Sherpa at 10:00 AM No comments: