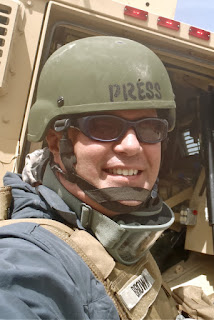 Randy Brown, author of the 2015 collection "Welcome to FOB Haiku: War Poems from Inside the Wire," was recently named a poetry finalist in the Second Annual Col. Darron L. Wright awards, for a new work that explores the connection of a World War II-era movie actress, and the technology used in modern wireless and data communications.

Brown's poem, "the frequency hop," mentions actress and inventor Hedy Lamarr, who first conceived of a way to prevent enemy forces from jamming signals to radio-controlled torpedoes, and a popular quote about actress and dancer Ginger Rogers:


"She did everything Fred Astaire did, except backwards and in high heels."

The quote is attributed to cartoonist Bob Thaves.