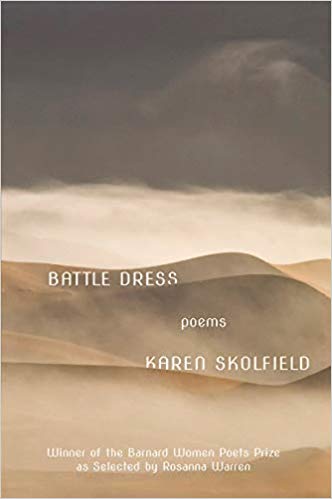 War poet Karen Skolfield is a U.S. Army veteran, an instructor of writing at the University of Massachusetts, Amherst; and, among other recognitions and prizes, a past runner-up in The Iowa Review's Jeff Sharlet Memorial Award for Veterans.

Skolfield's first poetry collection, 2013's "Frost in the Low Areas," contains precious few mentions of life in uniform. Notable samples from that work are the plain-spoken perspective of "Backblast Area Clear" and the hilarious "Army SMART Book: On Getting Lost." In her recently published second collection "Battle Dress," however, Skolfield fires-for-effect regarding her experiences with the military, fully and explicitly delivering on the rounds she first registered in "Frost in the Low Areas." The effort pays off for readers of both military and civilian backgrounds, accessibly and creatively exploring what it means to be soldier, and to be a woman at war.

Like the enlisted public affairs troop she once was, Skolfield takes aim at war with a photographer's eye for detail, a wicked sense of wordplay, and a soldierly love of others—even our younger selves—that can only be found in having shared the same foxhole. Her voice ranges from the mythic to the pastoral, from uncoded plain-text to battle-buddy confidential.

The 82-page book comprises 46 poems, presented across four untitled sections. Those who closely watch the "veterans-lit" space should recognize her byline: Skolfield has published widely; 41 of the poems have first appeared in literary journals.

The cover is a dusky, charcoal-and-buff vignette of clouds and dunes, which elegantly evokes one of Skolfield's longer works within, a dreamy mini-collection titled "Soldier Rendered as All Five Types of Sand Dunes." Rather than dwell long in such ethereal terrain, however, Skolfield is at her most sublime when she gets down and dirty.

In "Grenade: Origin, OFr. pomme-grenate," for example, Skolfield builds toward an epic momentum and a distinctively female view of the battlefield. As such, in this reviewer's opinion, it more than deserves to be read alongside Brian Turner's seminal 21st century war poem, "Here, Bullet."
Not as counterpoint, but as companion. One can imagine generating whole workshops from comparing and contrasting the two.

Turner's celebrated poem, after all, is full of the expected viscera and violence of combat, expertly placed in the body and mind of a soldier. The brutality is penetrative. Skolfield's poem likewise carves for readers a resonant space within which to experience a soldier's body and mind. Where Turner starts with a bullet, Skolfield throws a grenade. The results are no less explosive, or devastating.


[…] In mythology, every seed a month
of hell for the mother, the daughter,
her daughter's daughters
along the generations. In every war,
the same recognizable hunger.
Fruit of the dead, from living to not living,
also fruit of fertility, from one to many,
the names of the dead ripening.
How the arm extends, the palm opens,
the red pulp within, the perfect arc.
What is sown cannot be called back.
We say bearing fruit and it is borne.


/ […] We willed
our arms to be boys, our shoulders
brutal and male, we thought of torsos
and hands that had beaten or punched
or strangled or slapped or headlocked
women that were us or looked
like us and we wanted that strength.[…]

[…] Let us throw these grenades so far
that the drill sergeant says
God, seeing hand grenades thrown
like that gives me a hard-on
and we who are now male will laugh
at the rightness of it and we will say Me too.

Skolfield unpacks words like a rucksack, extra-large, one each. One of her techniques is to title poems after dictionary entries, or to reveal words as etymological sub-munitions within poems; "grenade," "enlist", "war," and "discharge" are a few examples. Another is the practice of quoting the Army SMART Book—a predecessor to the U.S. Army's Soldier's Manual of Common Tasks. In the latter, the prompts read as fragments from a religious text, or aphorisms from some tactically proficient spiritual guru. Some favorites? "Army SMART Book: Small-arms fire may sound like mosquitos" and "Army SMART book: This Page Left Blank Intentionally."

Skolfield occasionally also engages in controlled bursts of word-creation and -association, resulting in rapid-fire images and language. These moments not only serve as opportunities for her to contextualize military experience and jargon, but to help readers understand and inhabit those concepts emotionally. In "Private, PV2, Private First Class," for example, Skolfield begins …


From the Latin privare: to deprive,
fullsleep and showers, homethoughts,
other gender except that one dance
stomping in bivvie and combat boots
most of us decked Birth Control Glasses
woooo those things worked.

Camo paint gumming up our pores,
jungle palette: vineknot, humus, treetangle.
Pvt. Morales painting cheekbones
like Escher drawings.
If viewed one way were were women;
in another darkbirds winging into light. […]

Note how effortlessly Skolfield blends military nomenclature and slang, with punchy references to pop art and cosmetics. Seemingly just as easily, she often generates poems prompted by the day's minor headlines. Instead of focusing on above-the-fold items, she teases the timeless out of smaller stories—the one that veterans would talk about. Examples include the poems "Soldiers 'Fun' Photo with Flag-Draped Coffin Sparks Outrage"; "CNN Report: Rise in Sexual Assaults, Reprisals in the Military (2016)"; and "CNN Report: Symptoms of PTSD Mimic Lyme Disease." From the latter:

all in your head, you're home now,
you're safe, family to consider;
the meds, the weight gain,

the loss, the breathless, the rasp of it.
No magic bullet: tell me about it.
Sometimes a rash like a target
so loved by marksmen.
Despite everything, breath goes out
and is pulled back in.

How easy and wonderful and terrifying is Skofield's medical safety brief! In the field, soldiers are trained to watch out for ticks, which can carry disease, and to report and document any bites. Less understood and appreciated is Post-Traumatic Stress. Both Lyme disease and PTSD can be silent killers, years after the inciting exposure. Lesser hands would let the facts fall flat. Skolfield's inspired act is to not only report the connection, but to re-create it as metaphor, and to make the metaphor available to help educate others: Lyme Disease is like PTSD; PTSD is like Lyme Disease.

Remember to check your buddies.

Ideally, Skolfield's presence on the literary battlefield will help illuminate for editors, publishers, and other veterans the potential for more diverse collections of 21st century war poetry. In the meantime, her must-read "Battle Dress" delivers a keenly observed, hard-fought, and accessible perspective on military service, and making peace with oneself in a time of war. Most importantly, it provides useful images and tools with which to promote discussions between both "military" and "civilian" audiences.

Share it far and wide. Then wait for the fireworks. Because what is sown cannot be called back.
Posted by Charlie Sherpa at 5:00 AM