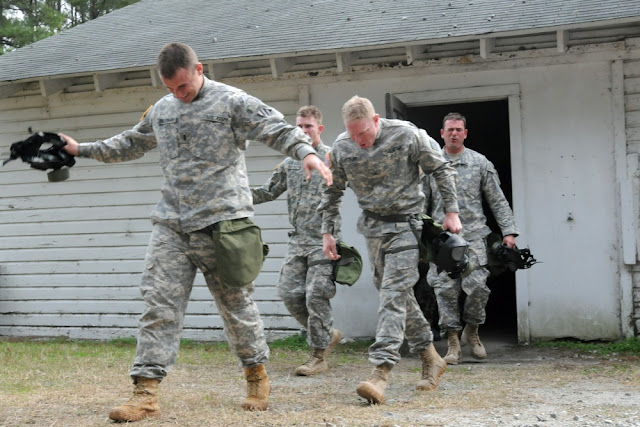 The author of "Welcome to FOB Haiku" has a new poem appearing in The New Verse News, a website that regularly presents "politically progressive poetry on current events and topical issues." Poems there are often inspired by recent news events and headlines.

Randy Brown's new work, titled "Unmasking Procedures," contains language borrowed and adapted from a procedure familiar to all U.S. Army soldiers. The task involves the deliberate removal of protective gear when a test kit for battlefield chemical agents is not available. (There is no such test kit for biological agents.)

The procedure is described in the U.S. Army “Soldier’s Manual of Common Tasks” (Skill Level 2) and related training. Most soldiers are annually tested on their abilities to correctly perform these and other tasks.

For troops, the unmasking process notably involves the selection of one or more soldiers—likely the lowest-ranking or least "mission-critical"—to serve as test subjects on behalf of a larger group. For more discussion of the ethics involved in such decisions, visit this link.

"This poem is in response to an on-going news story," the poet wrote as part of his submission. "The governor of my Midwestern state has repeatedly said that moves toward 're-opening the economy' would be deliberate and based on COVID-19 testing data. Despite continuing concerns regarding test accuracy and availability, however—as well as increasing infection numbers—the governor determined earlier this month to reopen most businesses statewide."

He adds, "I hope my poem's potential metaphorical connections are evident, regardless of readers' party affiliations or policy-positions. Further—given our shared experience—the poem might be a catalyst for respectful and constructive conversations, among veterans and non-veterans alike, and across the 'civil-military divide.'"