Poetry, War, and the Places They Meet 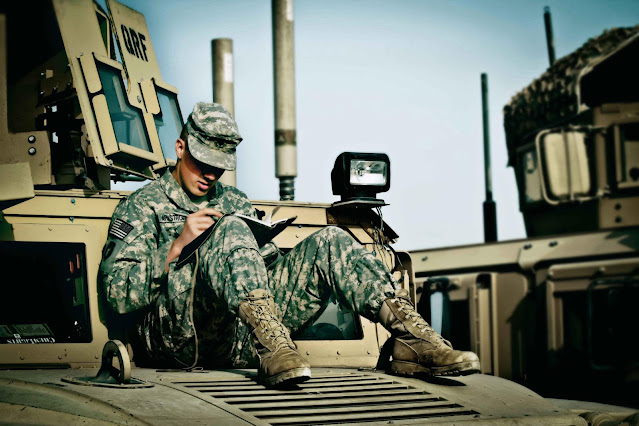 Editor’s note: As previously noted on this blog, April is National Poetry Month! This essay originally appeared in the April 2020 on-line edition of Consequence Magazine (recently relaunched as Consequence Forum).

No one gets into poetry for fame, glory, or money. As a “recovering journalist” (that’s a joke), I often quip that I’ve finally found a vocation that pays less than newspaper reporter: that of “citizen-soldier-poet.”

After years of writing and editing for newsstand consumer “how-to” magazines, concurrent with a 20-year career in the Iowa Army National Guard, I rediscovered poetry at a 2011 weekend writing workshop for military veterans. Hosted by a non-profit organization called “Writing My Way Back Home,” it was conducted on the campus of the University of Iowa, Iowa City.

After a 50-minute session reading soldierly poems—I don’t recall specific titles, so I’ll mention here Wilfred Owen’s 1917 “Dulce et Decorum Est” and Rudyard Kipling’s 1890 “Tommy” as two titles I now use in my own work with veterans—we were prompted to write freely for 10 minutes: “Write about smells, sounds, and other sense-based memories you associate with your experiences with the military.”

(Here’s a quick pro tip: Framing the prompt that way works for “civilian” audiences as well. After all, as the calendar flips toward nearly 20 years of war, every one of us—taxpayer, voter, citizen—has at least some connection with the culture and consequences of war. )

A few months earlier in 2011, I embedded as a freelance journalist with a brigade of Iowa citizen-soldiers deployed to Afghanistan. There, I’d again experienced the familiar tang of diesel-truck fumes, the staccato-chop of helicopters overhead, and the lulling background buzz of Uncle Sam’s electrical generators. But I had also encountered the frictions of changed contexts and perspectives.

As a member of the media, for example, I was prohibited from wearing a camouflage uniform or carrying a weapon—foreign concepts to any graduate of Army basic training. More than once during those weeks, I woke up in my bunk, sweating and panicked, hands flailing in the dark, trying to find my AWOL rifle. You think old habits die hard? Boot camp habits die harder. Call it the Ghost of Drill Sergeants Past.

So, at the workshop, I wrote my first war poem. It was about a hug.

The hug had bothered me for months. It was not a big event. It was not “news.” It was a small and unworthy thing—insufficient materiel, I thought, for even a blog post or postcard back home. And yet, it irritated my brain with the persistence of grit in an oyster. When I first arrived in Afghanistan, my former brigade commander—a man I respected and still feared, and who commanded the lives of 3,000 of my fellow Iowans—had greeted me not with a handshake, nor with a salute (I was now a civilian, after all), but with a hug.

I had spent months trying to figure out what that meant.

It took a poem for me to figure it out.

Author and Iraq War veteran Jason Poudrier (Red Fields, 2012) once told me about how he uses the practice of writing poetry to freeze moments, and to hold them up to inspection from different angles. Poetry, he said, allows for metaphor, uncertainty, contradiction, nuance. One thing can mean many things. Memories can be acknowledged—even honored—without having to be resolved. Then, after they are written down, they can be placed on a shelf—perhaps to be forgotten, perhaps to be reflected upon again later. Perhaps, even to be published, and shared with others.

The words that resulted from 10 minutes of workshop-prompted reflection were later polished and published as “Normally, a serious man”:

the brigade commander gives you a hug

and later a coin.

You keep turning up like a bad penny, he says.

You have followed him

across deserts and oceans.

First in uniform, now out of it.

You dress yourself these days.

to your color-filled wardrobe.

You are only following the rules, you tell them.

Camouflage, according to the Army, might make you a target.

The colonel’s coins are numbered.

Two hundred and forty-nine have come before,

but you are a first:

once part of the tribe, but no longer in the fight.

who also jumped on the plane late.

He got killed while pinned down

trying to secure a helicopter crash.

The coin is worthless, of course,

but it will pay your way back across the water,

once you have found yourself

“Why the hug?” you ask your buddies later.

It is because you are like a puppy, they say.

You remind the Old Man of better days.

You are no longer dangerous.

You are a puppy.

You are a penny.

In 2019, I co-edited a Military Writers Guild-sponsored anthology, Why We Write: Craft Essays on Writing War. Our contributors included poets and playwrights, novelists and educators, soldiers and sailors, think-tankers, historians, and more. Each was a practitioner of writing about war and national security topics, across various genres, platforms, and literary forms.
In one essay, “Recovering the Rhythm of War,” author and veteran Bill McCloud told about how he generated a 2017 collection of poems after re-reading a stack of 52 letters—words he had originally written as a U.S. soldier serving in Vietnam in the years 1968-1969. “When we first return from war, many of us choose either to not talk about it at all (for a variety of reasons), or to talk about it strictly by describing our own personal experiences. We make no attempt, early on, to fit ourselves into the big picture,” McCloud wrote. “I was ready to fit myself, the everyman, into the puzzle.”
My part-time military career was full of disappointments and joys, but it was hardly the stuff of movies and recruiting posters. I’d been an average soldier—a middle-manager in uniform. I was never the smartest, strongest, or highest-ranking person in the room. My Army job involved pushing buttons, connecting wires, and delivering messages. I never fired my weapon in anger. I did sling a few sandbags at home in Iowa. And I got a “combat patch” for overseas peacekeeping duty. Still, as a National Guard member, I was proud to serve my community and my country. Through my service, I had experiences and made friends I’d never have otherwise encountered.
For me, poetry has been one way to assemble those fragments of memory, to add personal and historical contexts to them, and to extract potential meaning from them.
When I read Owen’s words from 1917, denouncing the platitude he calls “the old Lie”—that it is sweet and fitting to die for one’s country—I think about the betrayal some of today’s veterans feel when hearing about peace talks with the Taliban.
And when I read Kipling’s words about how civil society fails its military veterans—the 19th century equivalent to a meme about “Thank You for Your Service”—I think about how my fellow citizens spent a year “building capacity” on behalf of the Government of the Islamic Republic of Afghanistan, but returned to unemployment, uncertainty, and eroding civil rights at home.
And when I read McCloud’s essay and new poetry from the Vietnam War, I connect my own “everyman” military experiences to a larger societal puzzle: We are each part of a long narrative. We are each boots on the ground. We are all in this together.
Poetry makes this conversation possible. I’ve seen it during poetry readings and book events. I’ve also seen it during breakfast, while reading the social media feeds of my fellow poets. Recent war poetry from U.S. military service members and families is as rich and varied as that from World Wars I and II, as well as wars in Korea, Vietnam, and the Persian Gulf—and the Cold War years between.
Thanks to the Internet, war poetry has never been more accessible. As a start, consider this friendly barrage of verse from modern airmen, soldiers, Marines, spouses, and others:
Poetry opens up the spaces for mutual empathy and understanding, for building metaphorical bridges across the equally metaphorical “civil-military gap.” So, military service members, veterans, families, and others: Write or read a war poem or two. Read it aloud. Share it with others. Talk about it.
April is National Poetry Month. Have you hugged a war poet today?

Randy Brown embedded with his former Iowa Army National Guard unit as a civilian journalist in Afghanistan, May-June 2011. A 20-year veteran with a previous overseas deployment, he subsequently authored the 2015 poetry collection Welcome to FOB Haiku: War Poems from Inside the Wire. He also co-edited the 2019 Military Writers Guild-sponsored anthology Why We Write: Craft Essays on Writing War. Since 2015, he has been the poetry editor at As You Were, the literary journal of the non-profit organization Military Experience & the Arts. As “Charlie Sherpa,” he blogs about poetry at www.fobhaiku.com, and about military-themed writing at www.aimingcircle.org.