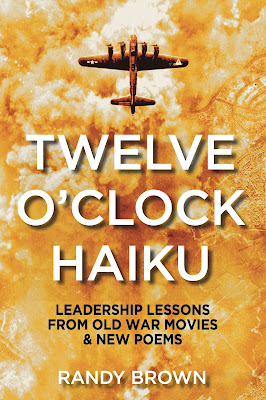 In a cheeky critique of the classic American air power narrative “Twelve O’Clock High,” award-winning soldier-poet, essayist, and humorist Randy Brown explores what it means to be a leader or follower at war—morally, physically, and psychologically. The book is packed full of insights into military life, as viewed through the lenses of war movies, history, and the author’s experiences as a one-time U.S. Army-trained “lessons-learned analyst.”
“I started out to write 12 haiku poems about a favorite old war movie,” says the author, “but my ‘whimsical experiment in minimalist war poetry’ mutated into a ‘maximum effort’ mix of memory, media, and military culture!” TWELVE O’CLOCK HAIKU: Leadership Lessons from Old War Movies & New Poems now comprises poems both old and new, a lyric essay about the film, and a list of resources for enthusiasts of World War II bomber poetry, history, and movies.
Brown first encountered the 1949 movie when on temporary duty as a U.S. Army citizen-soldier. Whether as a novel, film, or late-1960s television series, the “Twelve O’Clock High” franchise continues to be a touchstone in 21st century Professional Military Education (PME) and business-class discussions about transformative leadership, ethics, organizational learning, and management techniques.
In addition to other accolades, Brown is a three-time poetry finalist in the Col. Darron L. Wright Memorial Awards, administered annually by the Chicago-based literary journal Line of Advance. His 2015 collection, Welcome to FOB Haiku: War Poems from Inside the Wire, was awarded a gold medal distinction from the Military Writers Society of America. His chapbook So Frag & So Bold: Short Poems, Aphorisms & Other Wartime Fun was published in 2021.
He is the co-editor of two non-fiction books: Reporting for Duty: Citizen-Soldier Journalism from the Afghan Surge, 2010-2011, published in 2015; and Why We Write: Craft Essays on Writing War, published in 2019.
As “Charlie Sherpa,” he blogs about modern war poetry at www.fobhaiku.com, and about writing on military themes at www.aimingcircle.org.
Starting September 18, 2022 (the 75th birthday of the U.S. Air Force !!!):

Middle West Press LLC is a Johnston, Iowa-based editor and publisher of non-fiction, journalism, and poetry. As an independent micro-press, we publish one to four titles annually. Our projects are often inspired by the people, places, and history of the American Midwest.
Posted by Charlie Sherpa at 8:00 AM