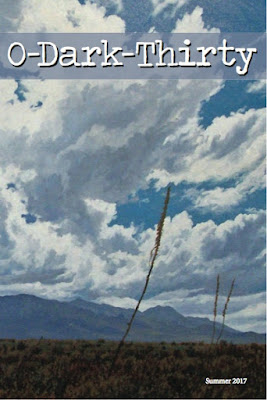 The non-profit Veterans Writing Project publishes both an on-line and quarterly print literary journal titled "O-Dark-Thirty." Editors there recently included in their nominations to the 2018 Pushcart Prize a poem by Randy Brown. Brown's poem "Airman, Second Grade" was published in their Summer 2017 "O-Dark-Thirty"—a special edition that focused on a theme of "identity."

A digital copy of that issue can be accessed FREE as a PDF at this link.

It is Brown's second Pushcart nomination. In 2016, his work "fighting seasons" was nominated by the War, Literature & the Arts Journal. That work also appears in his collection "Welcome to FOB Haiku: War Poems from Inside the Wire."

This is where
you ask me where I’m from.

And this is where
I tell you that my family and I
are in the Air Force.

Focused as a death-ray lens
on the playground ants below, you suddenly blaze
that my pants are on fire.

I do not understand why.
I know, just as the sky is blue:
My family is in the Air Force.

I have already moved four times
that I can remember. Each address
has been a new bicycle, and learning to pedal

through conversations like this one.
Kids can’t be in the Air Force, you laugh.

I burn, my face hot. My eyes sting.

But I get it now:
I am not from around here
and you are not